Actress Naya Rivera, best known for her role as Santana Lopez in “Glee,” is presumed drowned after she disappeared from a rented boat.

Actress Naya Rivera, best known as the snarky Santana Lopez on “Glee,” is presumed dead after she disappeared from a rented boat on a Southern California lake Wednesday, according to the Ventura County Sheriff’s Office.

By about 12 p.m. EDT Thursday, the effort to find Rivera had transitioned to a search and recovery effort. About 80 people were taking part in operations to find her body.

Sheriff’s officials said there was no evidence of foul play or any indication of a suicide, and that they believe whatever happened was an accident. Authorities said Rivera had been to the lake in the past.

The physical search for Rivera had been suspended overnight for safety reasons and resumed Thursday morning, said Deputy Chris Dyer, a spokesman for the agency.

Once a light fog burned off, a helicopter lifted off to assist in the operations. Deputies with the sheriff’s major crimes unit were also on hand at the remote area. 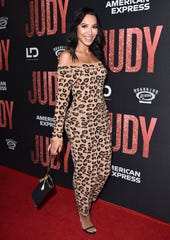 By 11:30 a.m., four dive boats were out scouring the northern shoreline and two helicopters hovered above in an area of Lake Piru called Juan Fernandez Spring.

A staging area on the lake’s north end had been created for search and rescue crews. Drones from the Sheriff’s Office were also being readied for the effort.

Sheriff’s officials also said they were awaiting the arrival of additional dive teams from Los Angeles County and sonar equipment to aid in their operations.

What we know about Rivera’s boating incident

The actress arrived at Lake Piru in Ventura County, about 60 miles northwest of Los Angeles, around 1 p.m. Wednesday and rented a boat with her 4-year-old son, said Capt. Eric Buschow, a spokesman for the Sheriff’s Office.

On Thursday, sheriff’s officials said Rivera had been overdue to return her rental and a staff member went in search of her. The staff member discovered the child aboard alone about 4 p.m.

Their vehicle remained at the site. The child was in the company of family, according to Buschow.

“We’re going on the belief that she did go in the water and we have not been able to locate her. So this may well be a case of drowning,” he said.

USA TODAY has reached out to Rivera’s publicist. 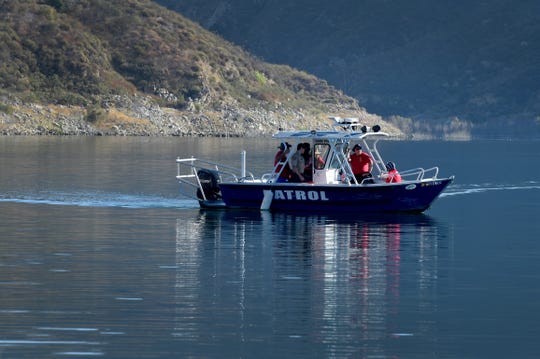 Search and Rescue teams use boats to look along the northern shore of Lake Piru on Thursday, July 9, 2020, for actress Naya Rivera. The “Glee” actress went missing after renting a boat with her 4-year-old son at Lake Piru on Wednesday. (Photo: ANTHONY PLASCENCIA/THE STAR)

Rivera starred as Santana Lopez on the Fox musical dramedy “Glee,” which ran from 2009 to 2015. A Southern California native, Rivera was born and raised in the Santa Clarita Valley of Los Angeles County, approximately 20 miles from Lake Piru.

She called her 4-year-old son, whose father is actor Ryan Dorsey, “my greatest success, and I will never do any better than him” in her 2016 memoir “Sorry Not Sorry.” Rivera and Dorsey divorced in June 2018 after nearly four years of marriage.

The actress was engaged to rapper Big Sean in 2013, but their relationship ended a year later. The pair met on Twitter and collaborated musically, with the rapper appearing on Rivera’s debut single “Sorry.” 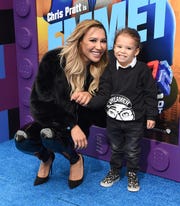 Actress Naya Rivera, known for her role in “Glee,” was reported missing on Wednesday after her 4-year-old son was found floating by himself in a rented boat in Ventura County, California, according to CBS Los Angeles. (Photo: Gregg DeGuire, Getty Images)

She started her career in entertainment at age 4, with recurring roles on “Family Matters” and “The Royal Family,” as well as minor appearances on other shows like “Baywatch” and “The Fresh Prince of Bel-Air,” according to IMDb.

Most recently, Rivera starred as Collette Jones for three seasons of the YouTube Red series “Step Up: High Water.”

The day before she went missing, Rivera posted a picture on Instagram embracing her son with the caption, “Just the two of us.”

On July 2, Rivera wrote on Instagram: “No matter the year, circumstance, or strife, every day you’re alive is a blessing. Make the most of today and every day you are given. tomorrow is not promised.”

Several of Rivera’s “Glee” castmates responded to the news, praying for her safe return.

“We need all the prayers we can get to bring our Naya back home to us,” wrote Heather Morris, who played Brittany Pierce. “We need your love and light.”

“Please pray for @nayarivera to be found safe and sound,” singer Demi Lovato, who played one of Rivera’s love interests in season 5 of the show, posted on her Instagram story alongside a photo of a lit candle.

Broadway star Kristin Chenoweth, who appeared on “Glee” as April Rhodes, tweeted that she was praying for Rivera to be found.

Chord Overstreet, who starred on “Glee,” encouraged his Twitter followers to “love and hug on the people you can, while you can.”

“I love you,” he continued. “Everyone please send out your prayers.”

love and hug on the people you can, while you can. I love you. Everyone please send out your prayers.

Alex Newell, who played Unique Adams on the show, tweeted, “NOTHING is impossible for my God!”

Actress Jackée Harry, who made a cameo as herself in season 5 of the show, tweeted, “Prayers up for the lovely Naya Rivera.”

Harry shared a scene the two shot together from Rivera’s first television series, “The Royal Family.”

Other stars have also tweeted about the news, including Nicole Polizzi of “Jersey Shore” fame.

“Waking up to Naya Rivera missing is an absolute tragedy. Praying for her safety. 🙏🏽🙏🏽 So absolutely heartbreaking thinking of her 4 year old,” she wrote with the hashtag #FindNaya.

Jeremy Childs is a breaking news and public safety reporter covering the night shift for the Ventura County Star. He can be reached by calling 805-437-0208 or emailing [email protected]. You can also find him on Twitter @Jeremy_Childs.