WASHINGTON — Trying to claw back into the lead in the race for president with time running out, Donald Trump is so aware of the voters he needs – the ones he’s struggling to win back – that he’s calling them out by name.

“To my favorite people in the world,” the president said in a video last week fresh off returning to the White House after battling the coronavirus. “The seniors.”

Days later, during a campaign stop Tuesday in Johnstown, Pa., Trump turned to the other demographic that could stand in the way of his reelection. “Do me a favor, suburban women, would you please like me? I saved your damn neighborhood, OK?” 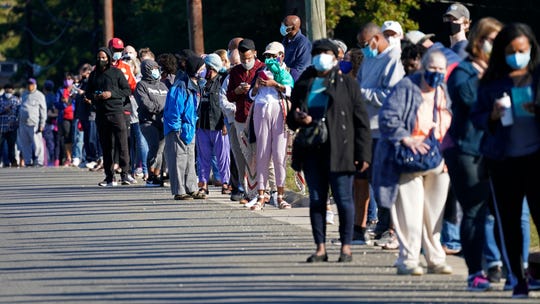 More: ‘Would you please like me?’ Trump appeals to suburban women during Pennsylvania rally

The former vice president’s position has brought back memories from 2016 when Democrat Hillary Clinton also led in polls three weeks from Election Day, before Trump’s victory. But Trump faces a problem unlike four years ago: The vast majority of voters – 95% or higher in most polls – say they have already decided who they’re backing and can’t be persuaded.

Adding to the troubles for the president: It comes as more than 26 million people have already voted early, fueled by a major advantage for Democrats in mail-in voting.

“I think it’s vitally important that the current president move out of the White House and on to his business practices,” said Bob Lowe, a 72-year-old retired superintendent from Le Center, Minn., who has already voted for Biden after backing libertarian candidate Gary Johnson in 2016.

Lowe, a political independent, said he’s “not enamored by either candidate” but called Trump’s response to the coronavirus pandemic “nothing short of abysmal” and said his “personality, actions and behaviors demean the office of the president of the United States.” He said he made up his mind up in August and doesn’t have any friends or family members still undecided.

“I think the lines have been drawn, perhaps for some time.”

With fewer undecided voters in this year’s election and not as many considering voting for a third-party candidate, Biden has eclipsed an important mark. He is consistently polling with support from more than 50% of voters, while Clinton typically polled in the high- or even mid-40s in October before the 2016 election.

Strong opinions about Trump after his four years in the White House have proven challenging for the president. And Biden, lacking the high negative marks that Clinton did, has turned into an elusive target for the Trump campaign. It has made for a remarkably stable race with little tightening in polls compared to past elections.

Trump has not led in the Real Clear Politics’ average of national polls since Biden became the Democratic nominee in August. Biden’s lowest mark has been 49%. Trump’s highest has been 43%.

An NPR/Maristy University Poll released Thursday found Biden ahead of Trump 54%-43% among likely voters. Only 2% said they are unsure who they will vote for and just 1% said they are backing a third-party candidate. Only 5% of voters said they could be persuaded to change their opinions.

“It’s an incredibly low number,” said Lee Miringoff, director of the Marist College Institute for Public Opinion. “President Trump’s strategy from the time he took office was to keep the base hopping. Because of his personality, it ends up a referendum on him when he really needs to make it a choice, and he hasn’t been able to do that.”

Miringoff added: “There’s very few people who are looking over the choices right now. That makes it very uphill for the president. It’s a very steep incline him for him. People are comparing it to 2016 but I think it’s a very false comparison.”

In the Real Clear Politics average of national polls, Biden held a 51.3%-42.3% lead over Trump among of likely voters as of Saturday. Trump was at roughly that same position in 2016, 42.2%, but Clinton’s polling average was lower than Biden’s, at 47.7%.

The percent of undecided voters in October polls four years ago generally ranged from 4% to 9%. The 2016 race was much more fluid.

Clinton and Trump received sizable bounces after their party’s conventions. Trump captured the lead in late July. In the last month of the race, Clinton got a boost after the release of Trump’s Access Hollywood video – in which he made vulgar comments about women – followed by a bounce for Trump after FBI Director James Comey announced an investigation into new emails discovered in the probe of Clinton’s personal email server.

More: Election week? Maybe not: Arizona, Florida and others could give early indication of who is winning

In addition to more undecided voters in 2016, more voters were also willing to vote for Johnson and another third-party candidate, Green Party nominee Jill Stein. Johnson finished with 3.3% of the vote and Stein 1.1%, enough to be a factor in several battleground states that Trump won by narrow margins.

In a 2016 NBC/Wall Street Journal poll taken between Oct. 8 and Oct. 10 of that year, Johnson polled at 9% and Stein at 2%. This year’s third-party candidates – Libertarian Jo Jorgensen, Green Party candidate Howie Hawkins and rapper Kanye West – are barely registering in most polls and won’t be on every states’ ballot. 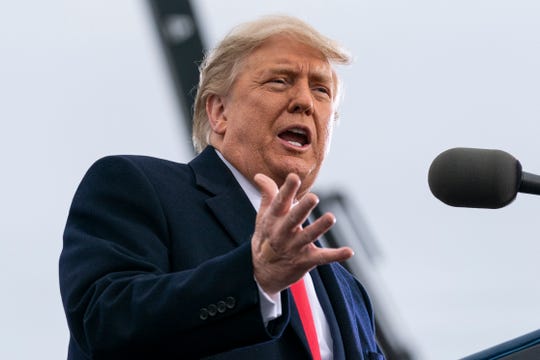 “It runs counter to the idea that there’s a hidden Trump vote,” said David Paleologos, director of the Suffolk University Political Research Center. “Part of the reason in 2016 that some of the states tipped Trump was because of the presence of third-party candidates, both Libertarian and Green, and a higher undecided.”

Paleologos said 2020 hasn’t mirrored 2016 because Biden has not become polarizing like Clinton or Trump. The Trump campaign has thrown the gauntlet to try to bring down Biden’s favorability ratings – painting him as a socialist, calling him mentally unfit and pushing narratives about his son Hunter Biden – but the attacks have largely fallen flat.

In contrast, Paleologos said four years ago many voters disliked Clinton “with a higher intensity” than they disliked Trump.

“There is still a long way to go in this campaign, and we think this race is far closer than folks on this website think,” she wrote on Twitter. “Like a lot closer.”

Despite seeing his support among seniors, in particular, nosedive during the coronavirus pandemic – Biden leads senior voters by around 20 percentage points in some battleground states – Trump has not altered his approach to appeal to voters who could still be persuadable.

A combative Trump was on display during Thursday’s town hall in Miami hosted by NBC News that featured uncommitted voters. Trump refused to denounce the group QAnon, falsely said 85% of people who wear masks get the coronavirus and said he couldn’t remember whether he tested negative for coronavirus before the first presidential debate. “So cute,” he said at one point to moderator Savannah Guthrie, as she pressed him on QAnon conspiracy theories.

One voter at the town hall, Paulette Dale, a registered Republican who said she’s leaning toward voting for Biden, fawned over the president, telling him: “I have to say, you have a great smile. You’re so handsome when you smile.”

And yet even she’s made her mind up. The Miami New Times reported Friday Dale is sticking with her plans to vote for Biden on Monday when early voting in Florida kicks off. “I wish he would smile more and talk less,” Dale, a retired professor at Miami Dade College, told the newspaper.

Trump won many late-breaking voters in 2016, but this year he’s struggled to keep his 2016 coalition fully intact.

Mike Loewenstein, 72, a self-described moderate conservative from Ocala, Florida – a retiree-heavy community where Trump campaigned Friday – voted for Trump four years ago. But he has pause about doing so this year, arguing Trump “blew his leadership role” addressing the pandemic. “A national emergency of that size, he blew it as a leader. He blew it politically.”

Loewenstein, a retired call center director, is not sold on Biden either and said he plans to review last week’s dueling town halls to see if “anybody actually said anything that makes sense to me.”

“I’m looking at what they’ve actually accomplished, versus what’s said,” Loewenstein said. “Once I make up my mind, I’ll make up mind, and I’ll just do it.”

Others like Gilbert Lightbourne, 66, an automotive consultant from Miami Gardens, Florida, decided months ago.

“(Trump’s) very divisive. I don’t think right now he’s the person to run the country. Too much drama, let me put it that way,” said Gilbert, a Democrat who plans to vote for Biden. “I’d just like to get this over and done and our country headed in the right direction.”